March is upon us and at the end of the month Batman V Superman: Dawn of Justice is coming to the movie theaters.  This is a film I’m very excited for and I figure this would be a good time to do some art based on the characters that will be in the movie for this month.  Today features the Michael Keaton version of Batman from the 1989 Tim Burton film.  When this movie came out, it was a big deal to me.  At that point I was a huge Marvel Comics fan and had not paid a lot of attention to the Dark Knight.  To be honest, I did not pay much attention to DC’s characters.  Like most kids I knew who the big players were.  I watched the Super Powers cartoon and the Batman tv show.  But that was about it.    This movie was very eye opening for me.

I can still remember reading the movie novelization, playing with the action figures, I had a cool Batman shirt and then going straight to the music store to get the Prince soundtrack right after the movie.

This movie is not perfect but I do still enjoy it.  Michael Keaton’s performance was great.  He played Bruce Wayne perfectly.  His Batman was intense.  I also enjoyed Kim Basinger as Vicki Vale.  But, I’m torn by Jack Nicholson as Joker.  I think the make up they did on him was great and of course his acting was just as good.  I always felt he was a bit too old and he does some pretty lame things, like pulling a 5 foot long hand gun out of his pants to shoot down the Batwing plane with one shot.  Ugh.  The mood of the film itself is perfect for Gotham City.  Tim Burton’s vision of the film is excellent.  And a completely different version of the setting and characters that we were previously used to from the Batman tv show of the 60’s.

The painting itself was something kind of new for me also.  I usually do not paint on a canvas textured surface.  I typically go for a smooth surface to paint on like the paintings I did in January.  And, I haven’t played around with oil paints since I had my last art show.  Technique was also a new thing for me on this painting.  I have been recently studying a new painting instructional book and also watching some dvds about painting.  So, this is a new way of thinking when I paint.

We will have to see how this painting technique pans out for me in the future. 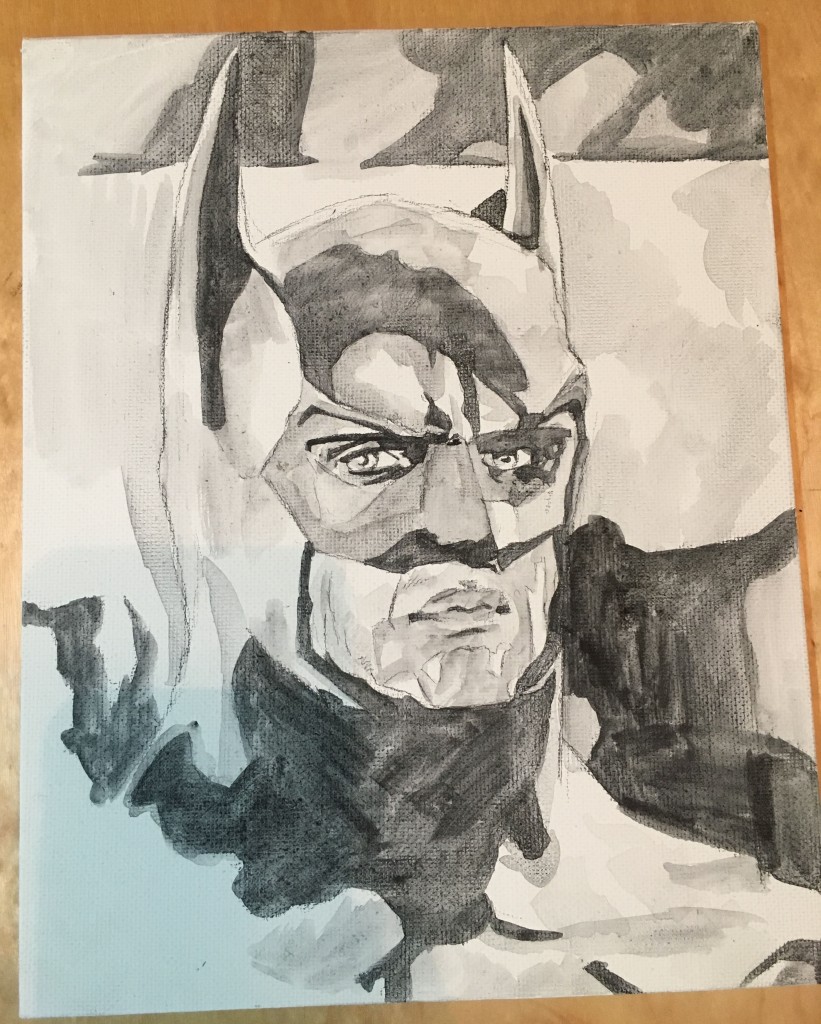 Here is the under painting before I started laying on the oil paint.

Next up we shall see who challenges Batman in the new film, Superman.